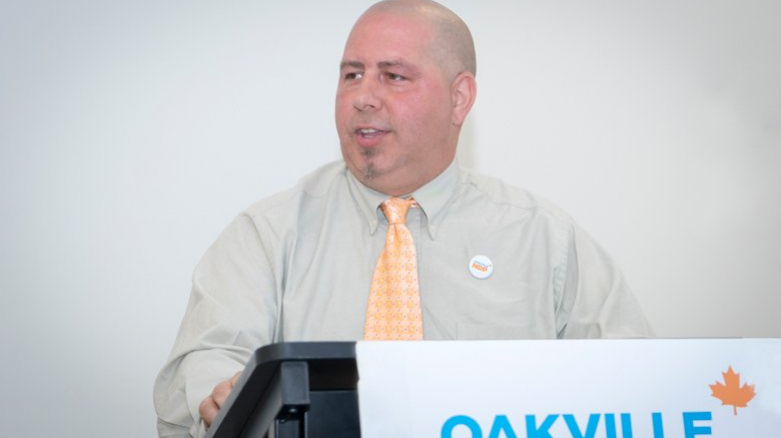 Community activist and early childhood educator Jerome Adamo has been chosen by the Oakville NDP Riding Association as its candidate for the upcoming federal election.

“Oakville needs a fighter for progressive ideas on issues that Canadians care about,” says Adamo. “I worry about the future for my twin boys, who are now growing up in a Canada whose opportunities are being dismantled.”

Adamo is 47 years old and has been a committed social activist for three decades, and has worked with the Halton District School Board for the past four years as a designated early childhood educator. He lives in Oakville with his domestic partner Tanya and their teenage boys.

“The NDP has the plan to make life better for working people in Oakville and throughout the country,” says Adamo. “Universal pharmacare, building affordable housing, climate justice, fair taxation, affordable child care, and workers’ rights are issues I take close to heart.”

Adamo is the Political Action Committee Chair of the Halton DECE Local of the Elementary Teachers Federation of Ontario, a member of the Council of Canadians, a board member of Community Development Halton and an executive member and delegate to the Oakville District Labour Council.

“We’re very proud to have Jerome represent the NDP for the upcoming federal election this Fall,” says Oakville NDP campaign manager Diana Clarke. “He has such a vast array of lived experiences working in this community for years. He cares deeply about Oakville and its voters and understands their needs. People from both inside and outside the NDP are really excited about Jerome’s campaign.”

Adamo is particularly concerned about the growing number of scandals under the Trudeau Liberals, and the promises they haven’t kept since the last election in 2015. “Only Jagmeet Singh and the NDP will secure funding for health care, build housing people can afford, initiate electoral reform, protect our environment, and once and for all, create a universal drug plan for all Canadians.”

Although the election is only set for this Fall, Adamo considers the campaign underway already. “It starts here and now. I look forward to meeting thousands of Oakville voters throughout the summer and listening carefully to the changes they want to see in Ottawa,” he says. “Let’s start this journey together.”