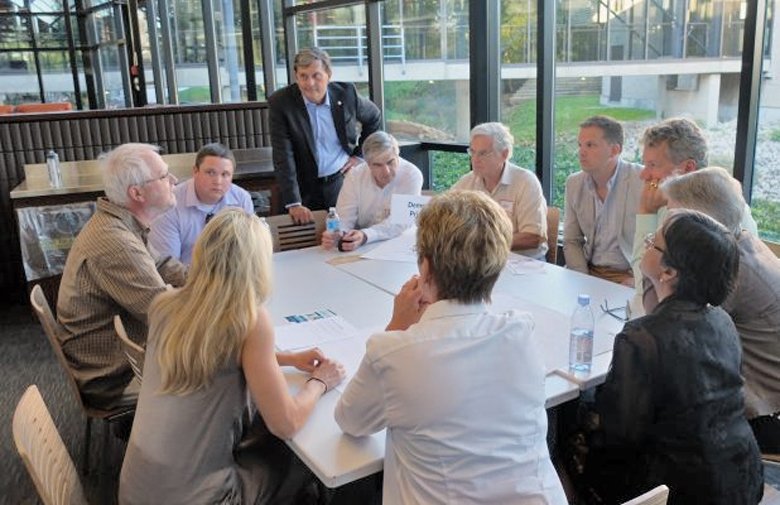 John Oliver organized two “town halls” to obtain input from citizens of Oakville on two issues:
climate change and electoral reform. It was stated that the input would be forwarded to the appropriate Federal entities: the Minister of the Environment and Climate Change, and the parliamentary committee on election reform.

The same format was used in both town halls. Tables were set up, each one with a different topic. Each table had seats for about ten people. About 20 minutes was allocated for discussion at each table, and one of the participants volunteered to write down the points on display sized sheet of paper. At the end of the 20 minutes people migrated to another topic of their choice. At the end of this process people were invited to make statements or ask questions. The questions and statements were noted again for passing on the appropriate parliamentary body.

The procedure used for the electoral reform town hall was an opening statement by John Oliver, basically to introduce Mark Holland, Liberal MP for Pickering, and who is the Parliamentary Secretary attached to the multi-party committee on electoral reform. Mr. Holland presented an overview of the work of the committee and stressed that the event in Oakville was but one of several hundred such town halls being held all over Canada.

No actual numbers were given, even though prior registration was requested. There were two different venues so it was difficult to assess, but there were likely over 100 persons at each event – both halls were full. There were likely more attendees at the electoral reform town hall than at the one on climate change. Because of the time of the meetings (18:00) most people there were in the retirees bracket. This is not a good time for younger people with young families to attend. It isn’t known if this fact was taken into account by the organizers. One further comment – racially, the attendees were overwhelmingly white, and probably in excess of the proportion of the Oakville population

1. Climate Change: Although this topic creates a strong emotional response, it is in reality, very technical, so there was quite a bit of digression from expressing general principles (such as increasing research and development, and ensuring R & D spending was properly directed), to discussions on specific measures that someone had read about or had looked at some information on the internet. Clearly this was not a forum for discussing specifics, so doing so took up time from the expression of general principles. My sense was that there was a consensus that there should be government spending on investigating and developing alternative technologies, and that expanding the use of electric vehicles was probably a good idea.

2. Electoral Reform: the topics discussed here included changes in voting technology (voting machines and on-line voting), the state of democracy in Canada, and other topics. There was a concern that unless they are very carefully designed, voting machines can be tampered with. The plenary discussion following the discussion on the individual aspects was informative and well organized – speakers were allowed just two minutes to make their points. My overall impression was that the people who attended were overwhelmingly supportive of changing the First Past the Post system, for some form of proportional representation, and also they were overwhelmingly against the idea of holding a referendum on the topic.

Several variants of PR were discussed – such as a dual voting procedure, one for a party, and the other for a local representative. The different mechanisms for voting was also discussed – ranking candidates for example, and the transferable vote system. Mark Holland said that once all the views had been looked at and discussed, the committee would bring forward its recommendations to parliament, probably in early 2017, so this would give parliament time to debate the issue, make amendments as appropriate, then have legislation in place in good time for the 2019 Federal election.