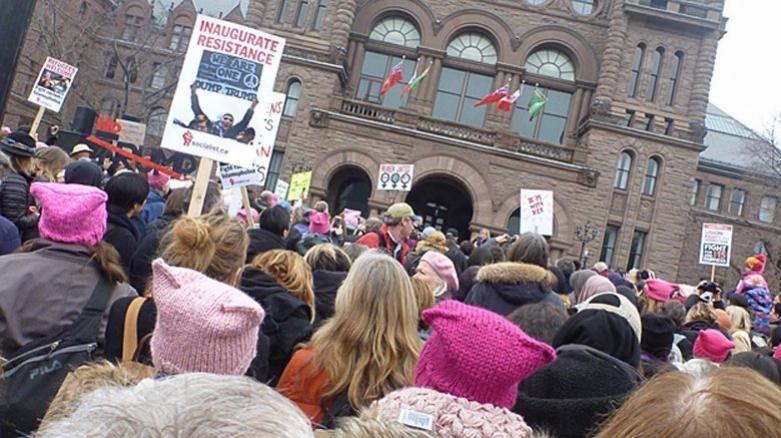 On Saturday, January 21, organizers estimated that the “Women’s March on Washington: Toronto” attracted 60,000 protesters. Ontario NDP leader Andrea Horvath was among the thousands who gathered in front of the Provincial Legislature at Queens Park to hear speeches about the freedoms women are still fighting for and all those they are determined not to lose.

After a minute’s silence to envision what gender equality might look like, we marched in carnival atmosphere to the sound of samba rhythms, as far as the US Consulate, where a small band of female police officers looked benignly on. We made our way to Nathan Philips Square for more music and more speeches, before dispersing peacefully, to think about how to carry on the fight against fascist extremism in the days to come.

It is reported that of the 200 buses taking Canadian women to the march in Washington, two were turned back when the border guards learned they were protesting against President Trump. The message was swiftly shared and passengers on the remaining buses declared that they were going shopping! In cities across Canada and elsewhere in Europe, women turned out in their thousands to send the message that extreme righ-wing policies are unacceptable in today’s world.